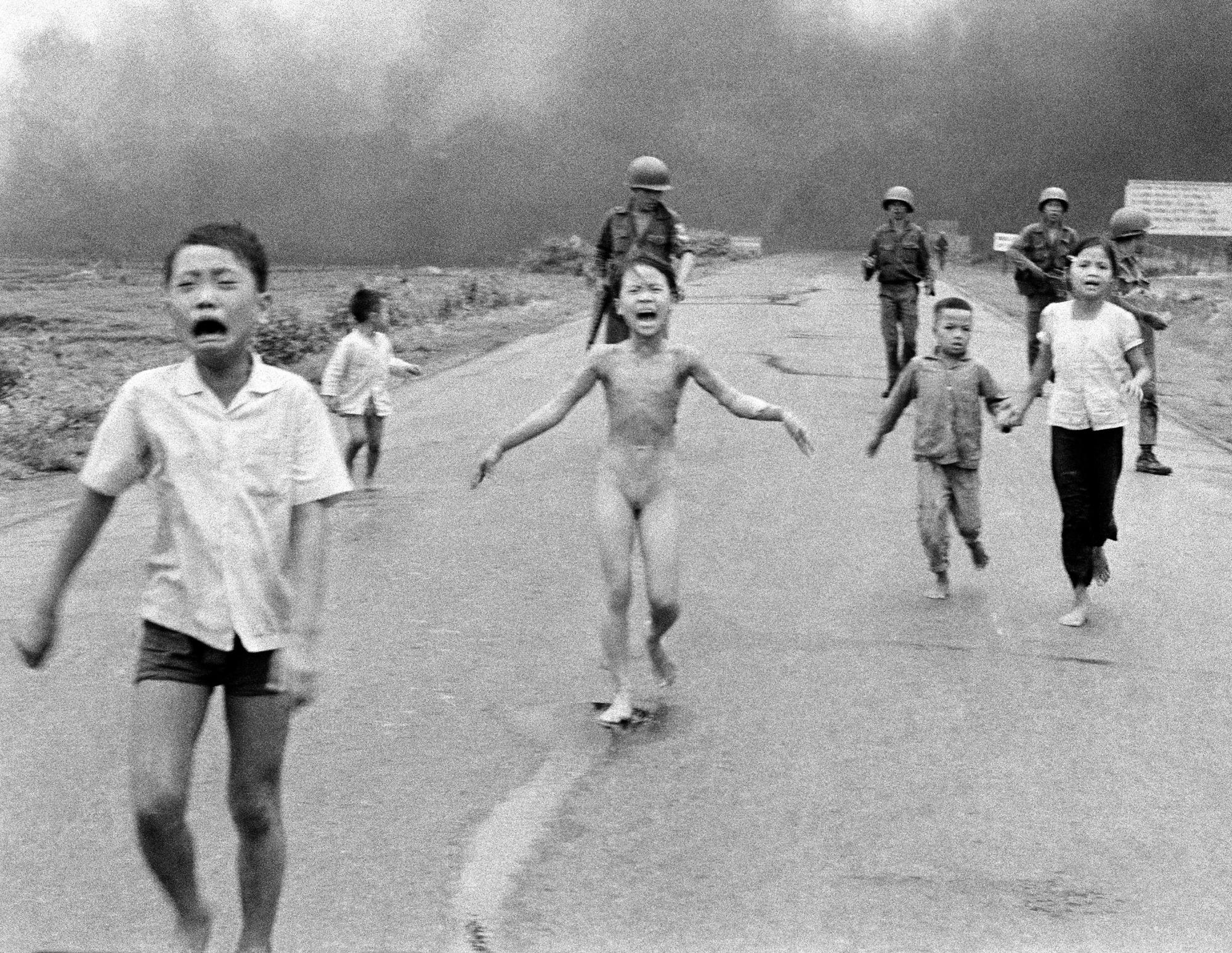 AP war photos: From Iwo Jima to the napalm girl and beyond

By The Associated Press

The girl, naked and screaming, ran directly toward Nick Ut’s camera — and into history.

Her name is Kim Phuc, and the instant the Associated Press photographer captured her image 50 years ago — on June 8, 1972 — she became more than a victim of a South Vietnamese napalm strike on her hamlet. She was and is an international symbol of that unpopular war, and of the torment inflicted on innocents in all wars.

For nearly a century, the AP has covered war with images. Some won Pulitzer Prizes, like Ut’s napalm girl, like Eddie Adam’s breathtaking photo of the execution of a Viet Cong prisoner, like Joe Rosenthal’s tableau of Marines raising the flag on Iwo Jima’s Mount Suribachi. 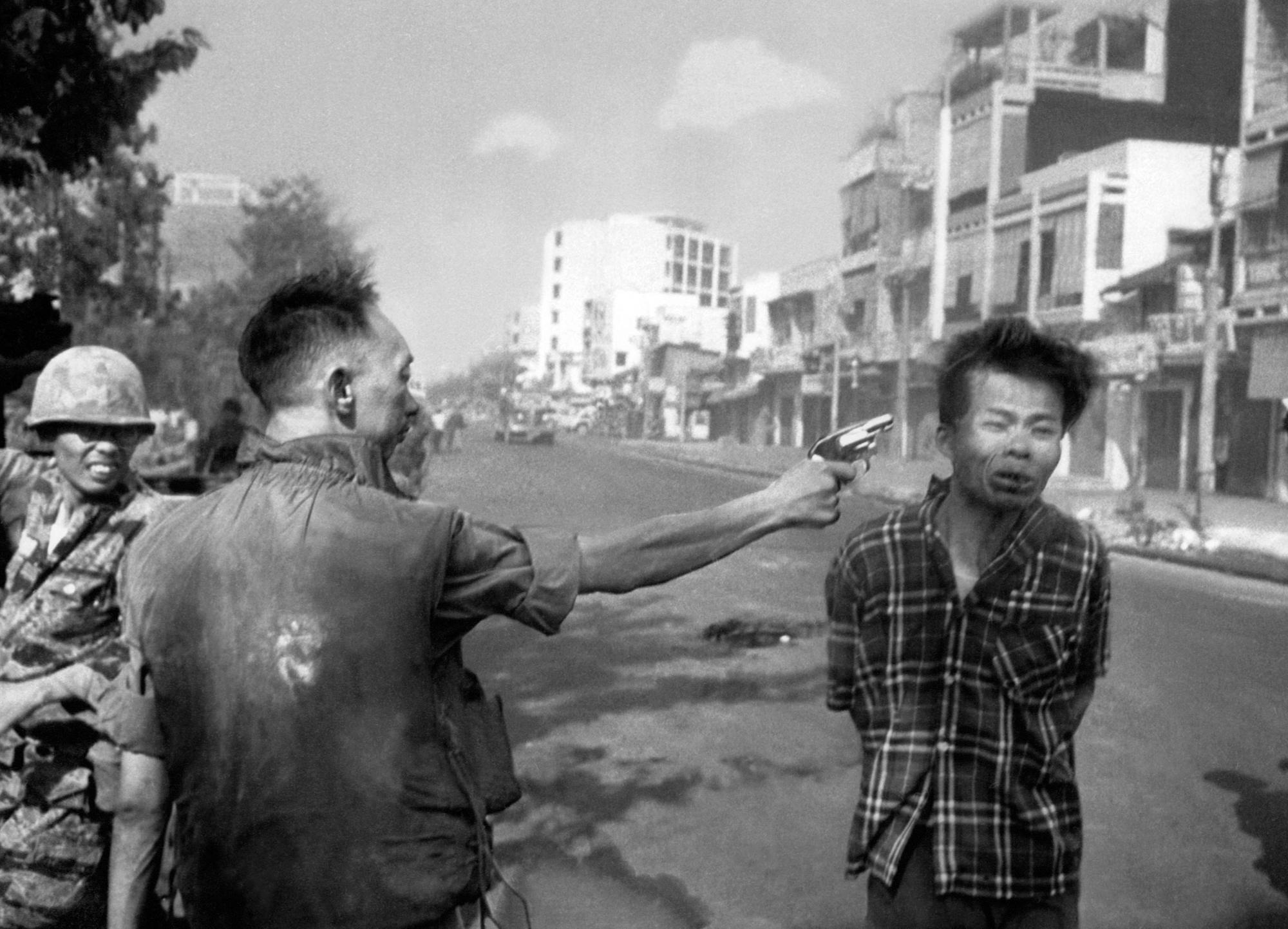 South Vietnamese National Police Chief Brig Gen. Nguyen Ngoc Loan executes a suspected Viet Cong officer with a single pistol shot in the head in Saigon, Vietnam, Feb. 1, 1968. The Viet Cong guerrilla was captured near Quang Pagoda carrying a pistol and wearing civilian clothes. He was identified as an officer and taken to the police chief. (AP Photo/Eddie Adams) 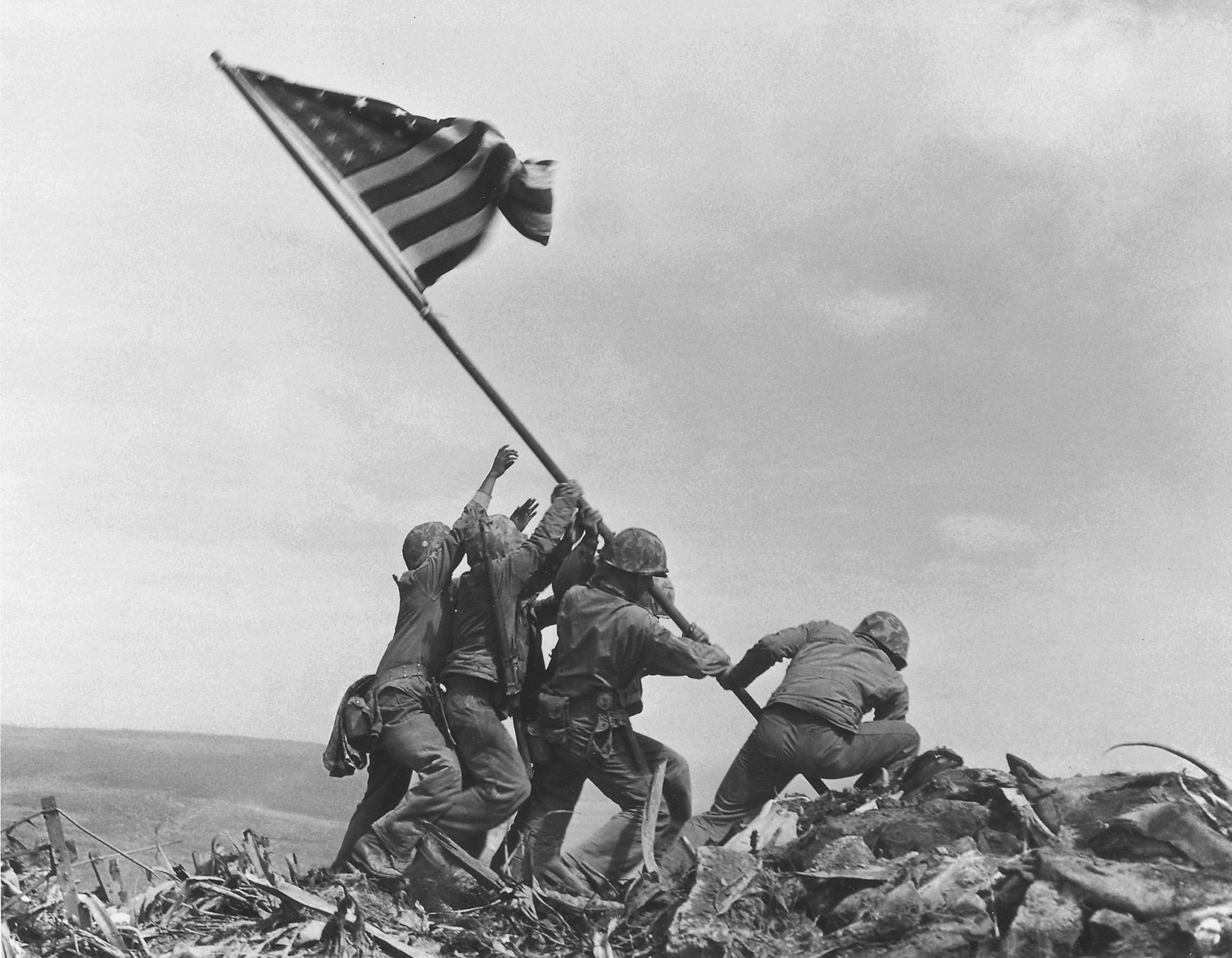 U.S. Marines of the 28th Regiment, 5th Division, raise the U.S. flag on Mt. Suribachi, Iwo Jima, Feb. 23, 1945. Strategically located only 660 miles from Tokyo, the Pacific island became the site of one of the bloodiest, most famous battles of World War II against Japan. (AP Photo/Joe Rosenthal)

They and others are engraved in global memory, often resonating in ways that words and video do not.

Some show war’s action — a Palestinian with stone in hand confronts an Israeli tank; Korean refugees crawl over a shattered bridge, like ants; a statue of Iraqi leader Saddam Hussein crashes to the ground.

But others focus on the pain, and the losses. A Marine, bleeding profusely around his neck, is evacuated by helicopter after a bombing in Afghanistan. A man displays scars left by machete-wielding gangs in the Rwandan genocide. A Palestinian woman, her face a mask of fury and grief, brandishes helmets left behind by those responsible for a massacre at the Sabra refugee camp in Lebanon.

All too often, the war photos depict young victims.

Thirty-eight years apart, in Vietnam and Syria, fathers clutch the bodies of their dead children. In between, in 1994, a 7-year-old boy lies mortally wounded in a pool of blood in Serajevo.

And then, this year, Evgeniy Maloletka captured the aftermath of the Russian bombing of a maternity hospital in Mariupol, Ukraine. Five men carried a pregnant woman on a stretcher. Her pelvis had been crushed; she would not survive.

Nor would her unborn child. 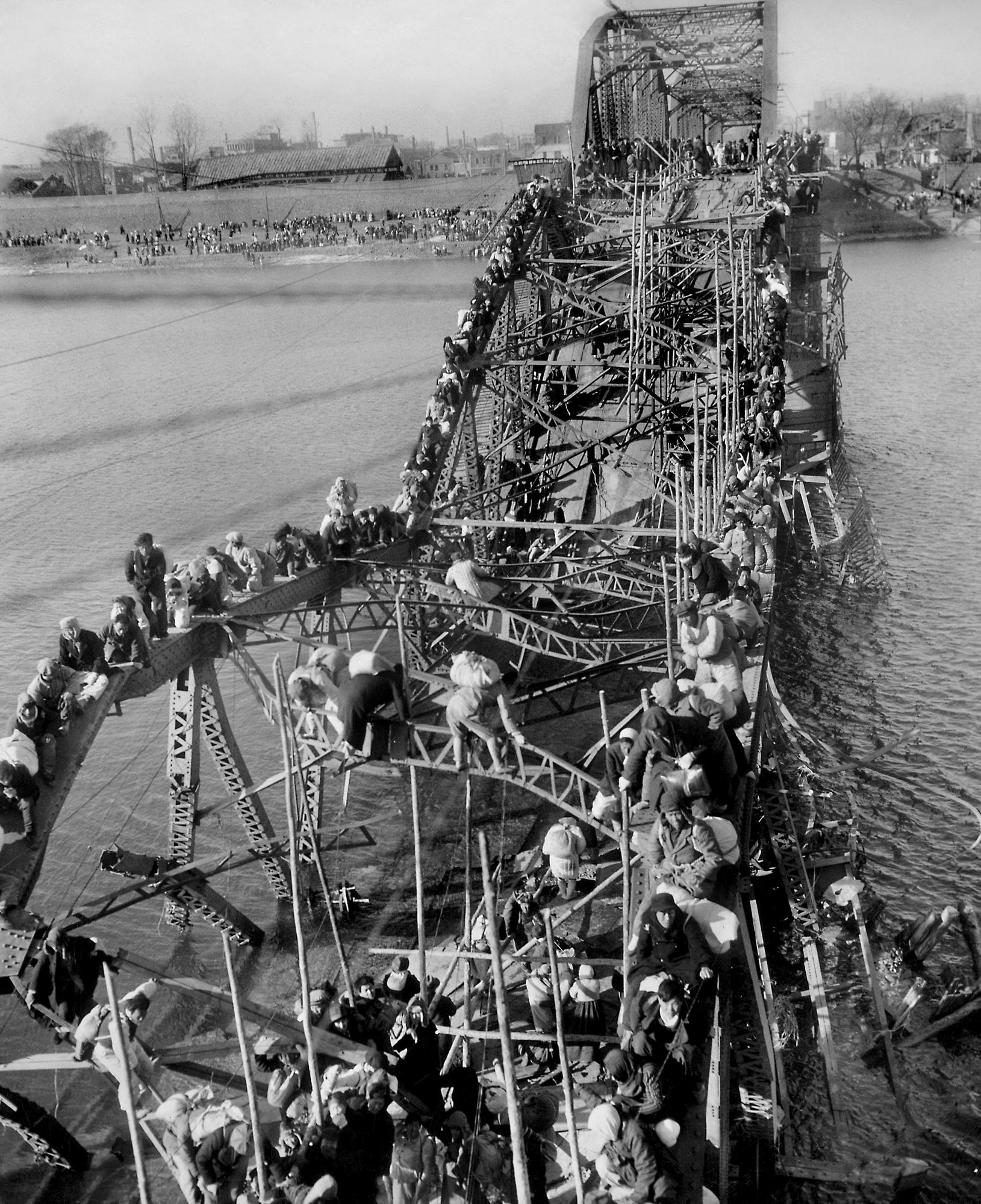 Residents from Pyongyang, North Korea, and refugees from other areas crawl over shattered girders of the city’s bridge to flee south across the Taedong River and escape the advance of Chinese Communist troops, Dec. 4, 1950. The Chinese entered the Korean War as allies of North Korea, while U.S. troops battled in support of South Korea. The fighting ended in 1953 with a military demarcation line set near the 38th parallel where it started in 1950, and Korea remains divided today. (AP Photo/Max Desfor) 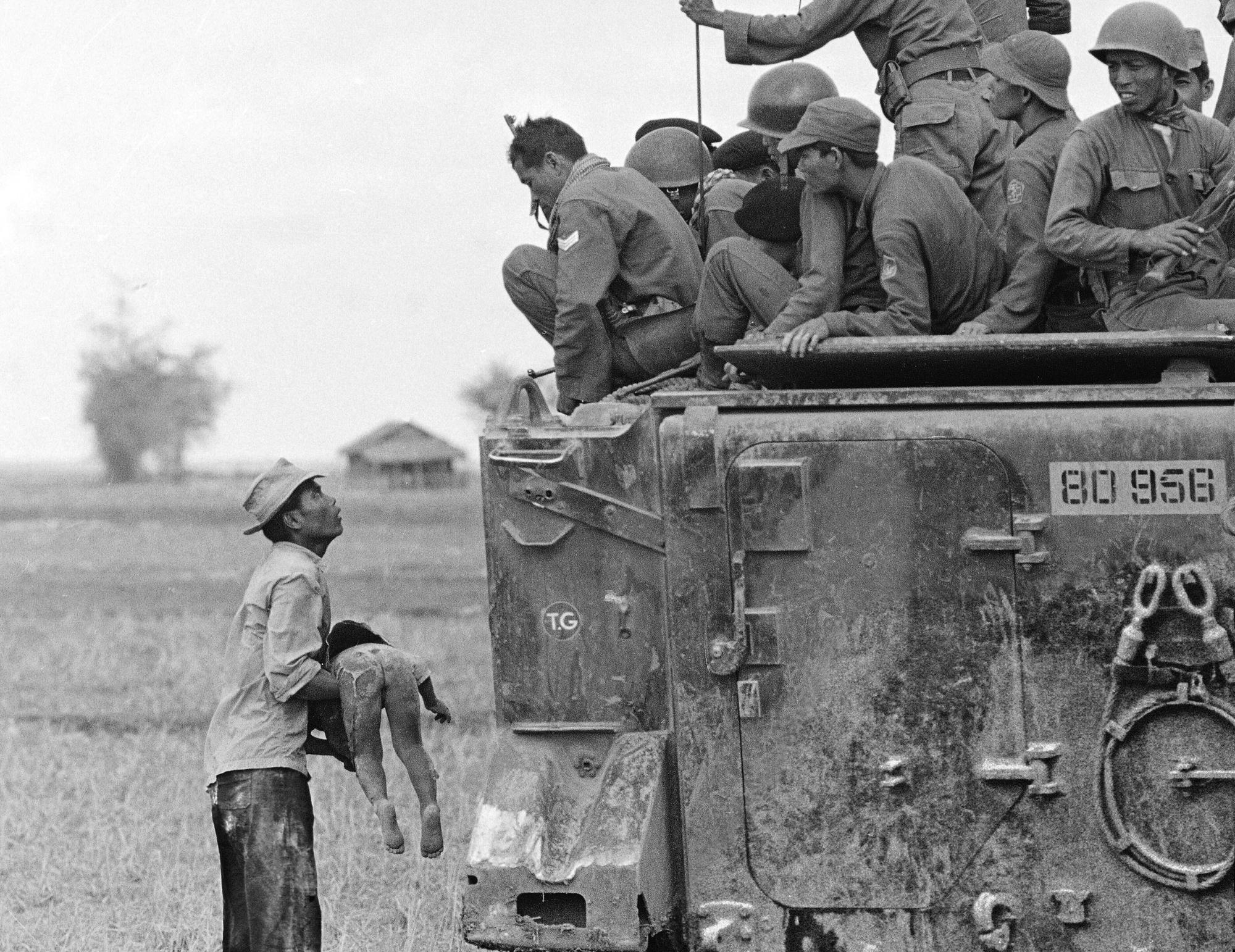 A father holds the body of his child as South Vietnamese Army Rangers look down from their armored vehicle, March 19, 1964. The child was killed as government forces pursued guerrillas into a village near the Cambodian border. (AP Photo/Horst Faas)
ADVERTISEMENT 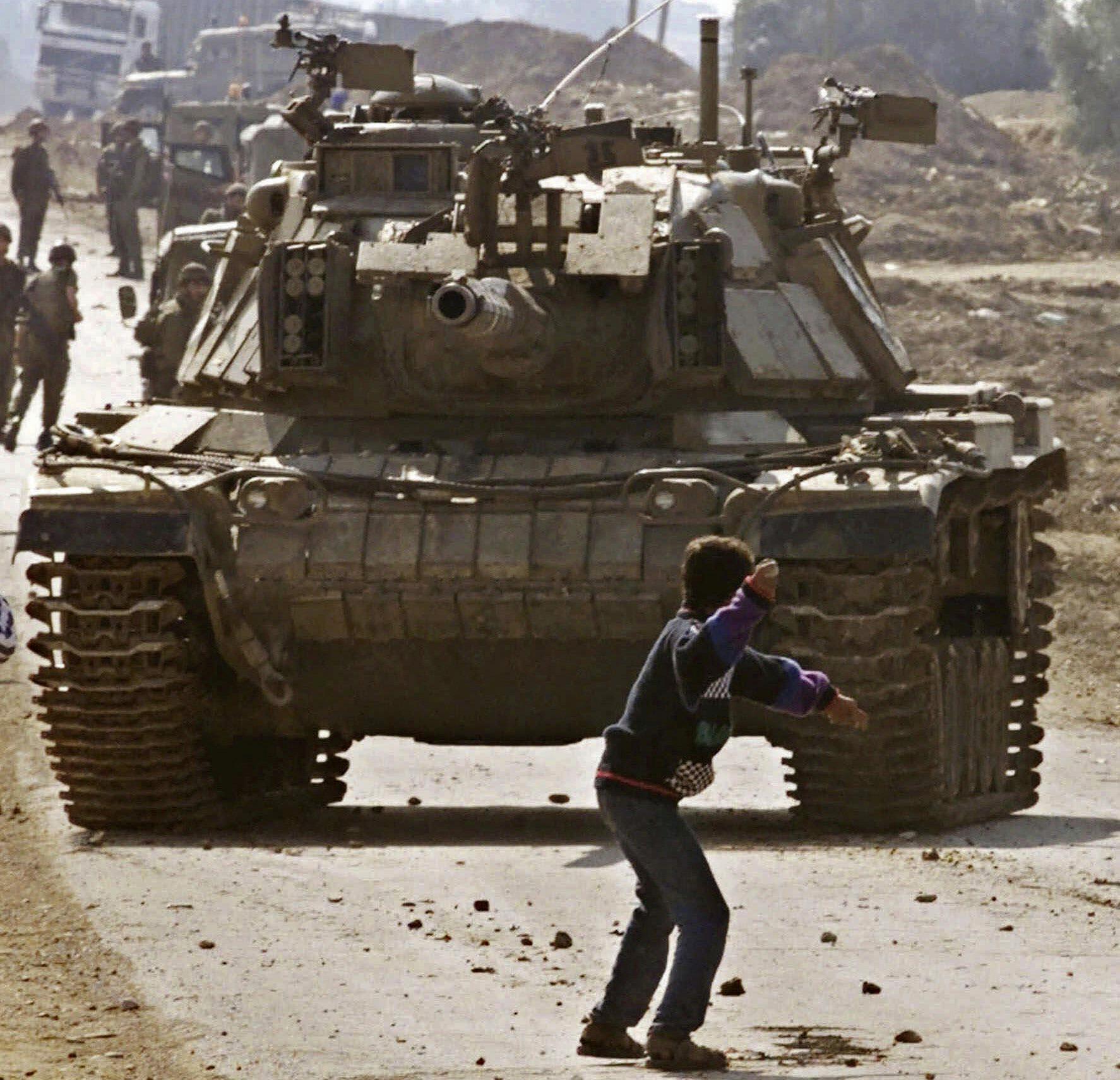 A Palestinian stone thrower faces an Israeli tank during clashes at the Karni crossing point between Israel and the Gaza Strip on the outskirts of Gaza City, Oct. 29, 2000. (AP Photo/Laurent Rebours) 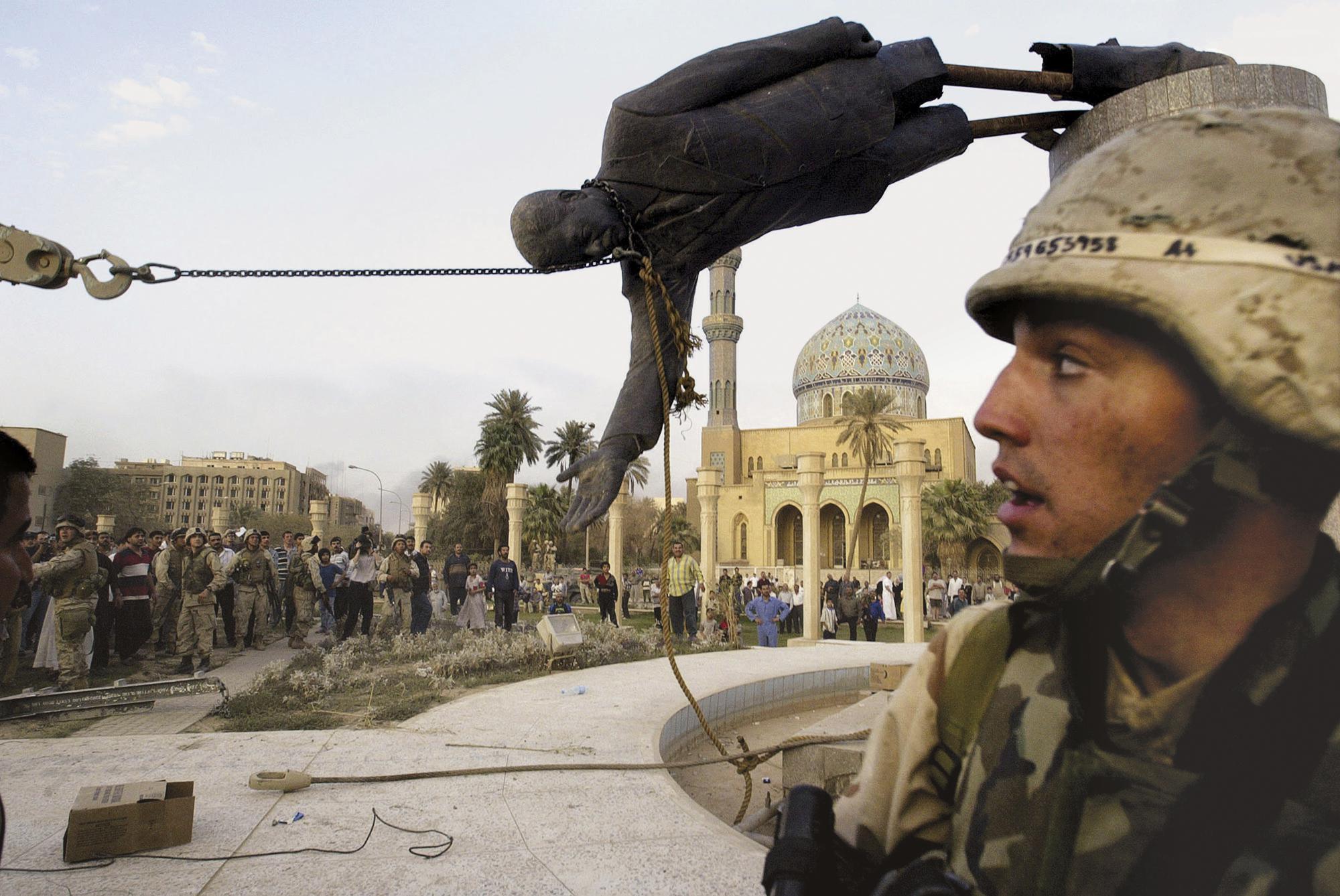 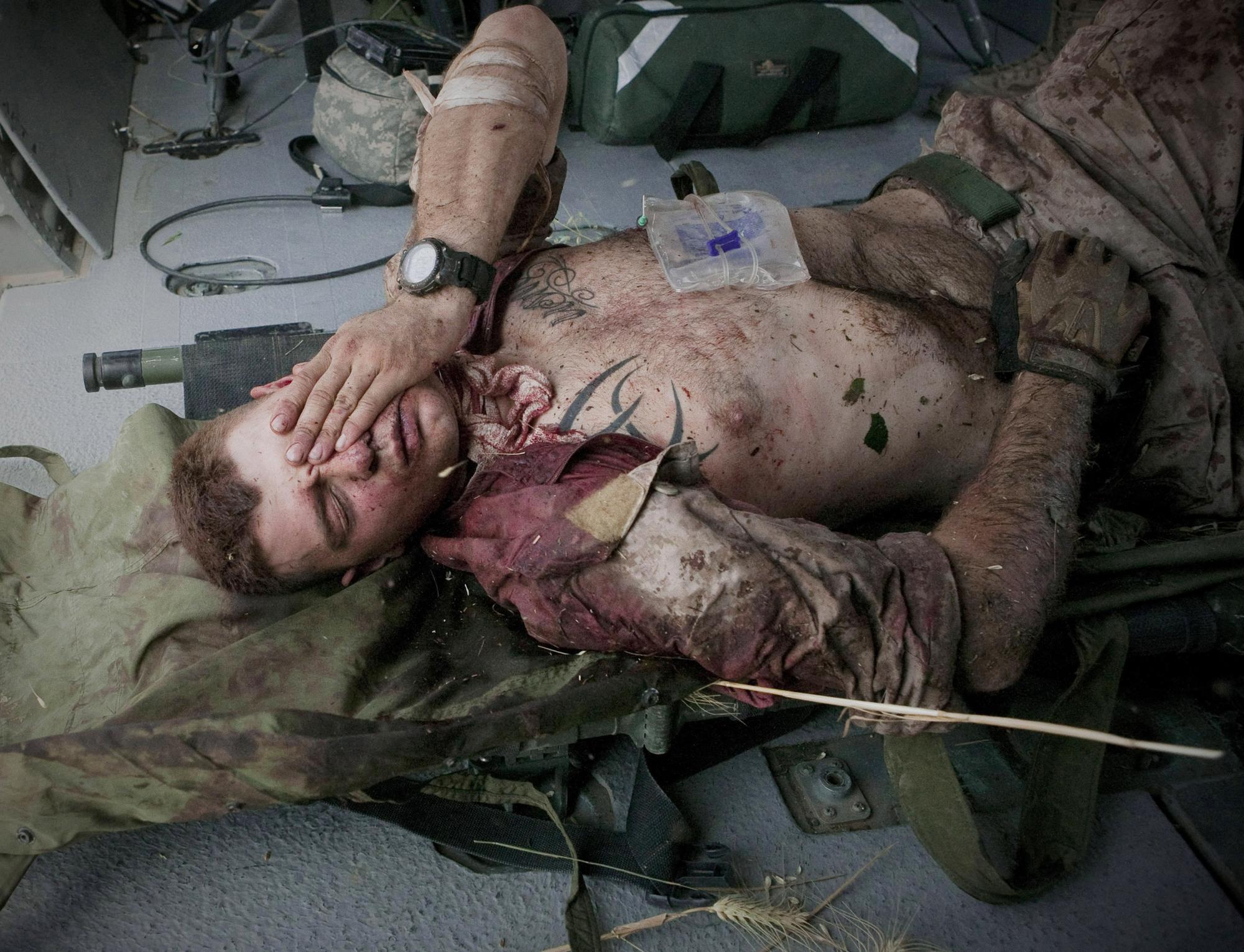 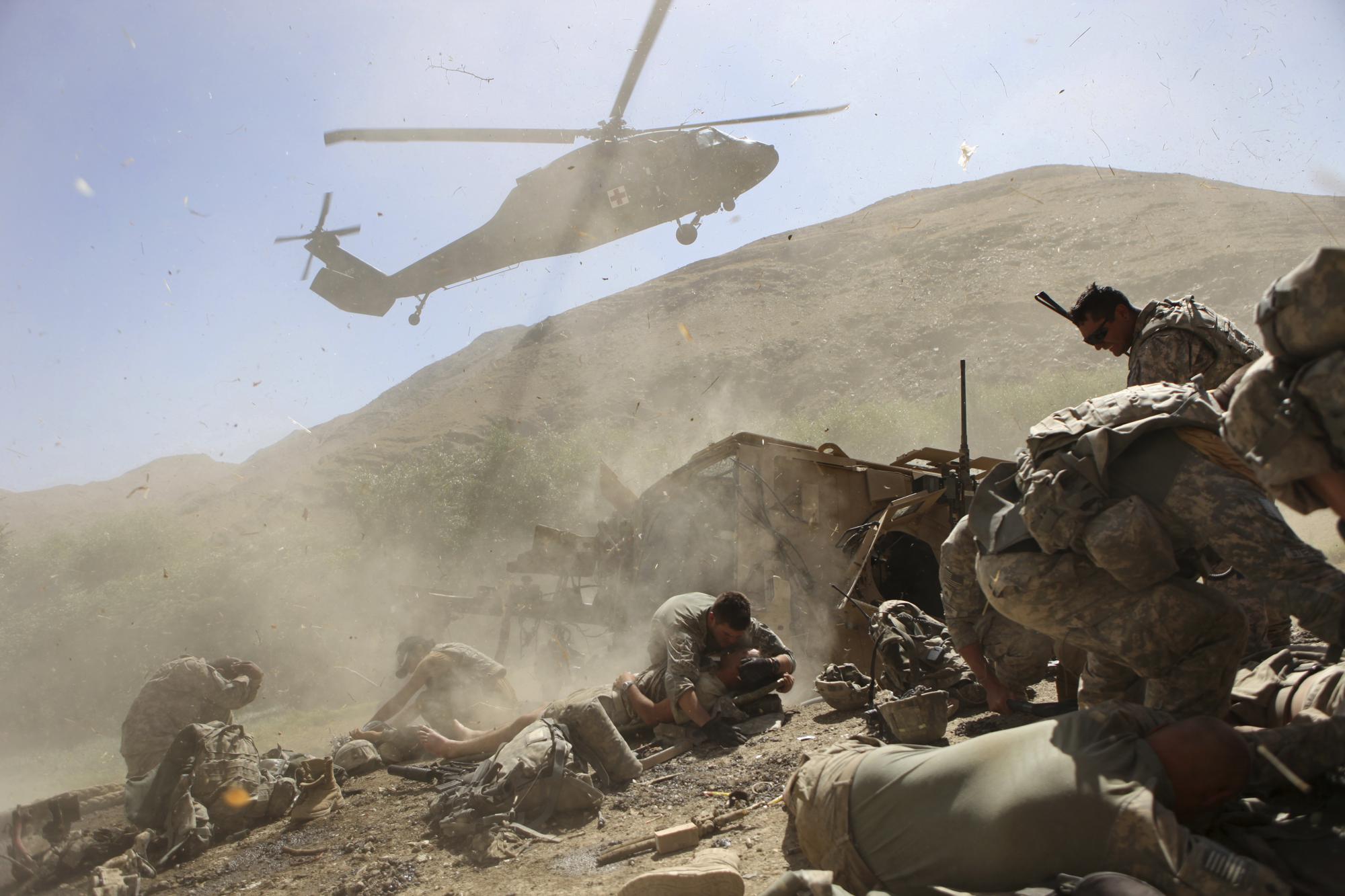 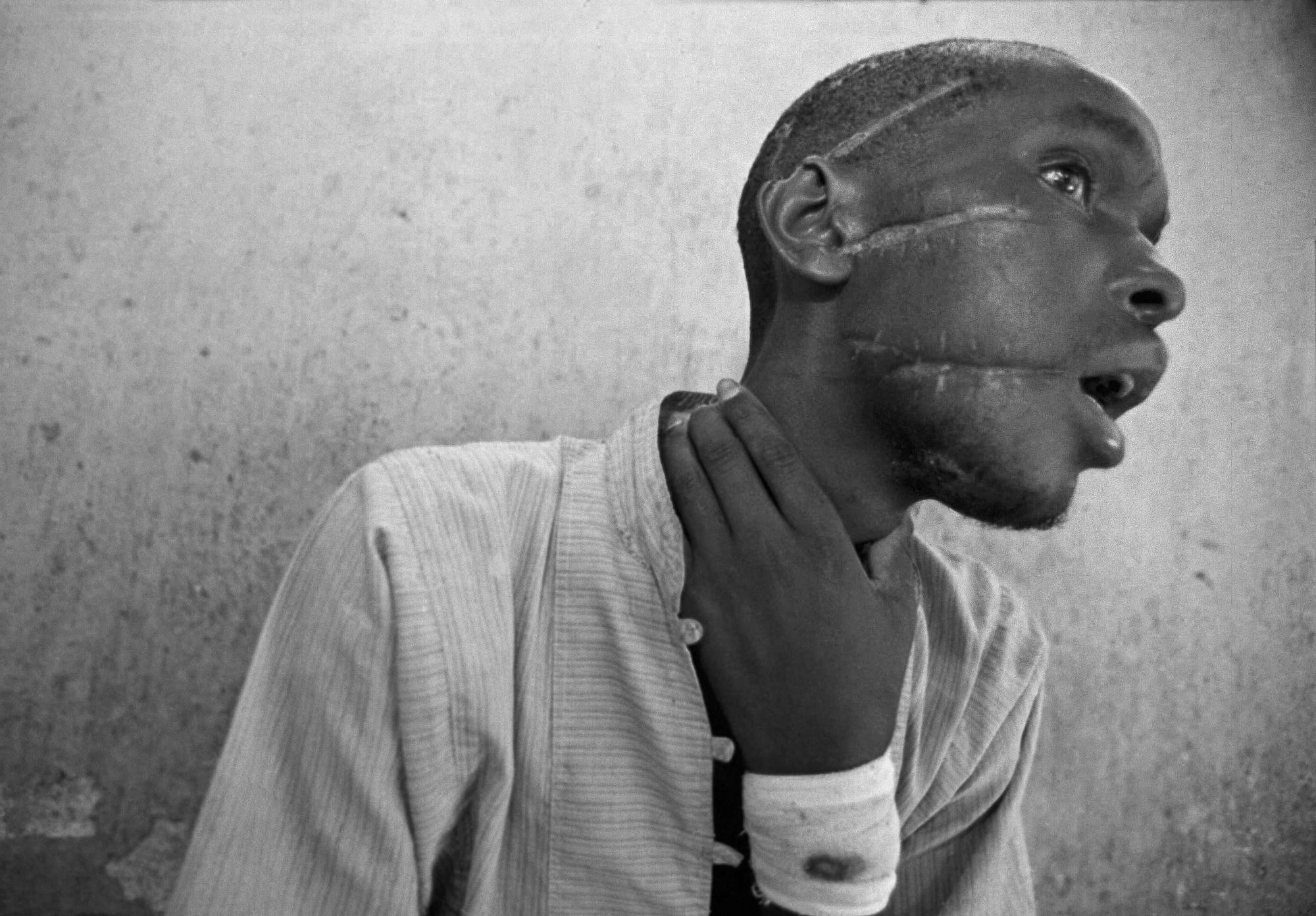 Nyabimana, 26, who was evacuated after being found by the Red Cross wandering in Kabgayi, shows his machete wounds at an International Committee of the Red Cross hospital in Nyanza, Rwanda, June 4, 1994. The massacres, mostly by machete-wielding gangs, swept across Rwanda where people were killed in their homes and farms, as well as in churches and schools where they sought shelter. (AP Photo/Jean-Marc Bouju) 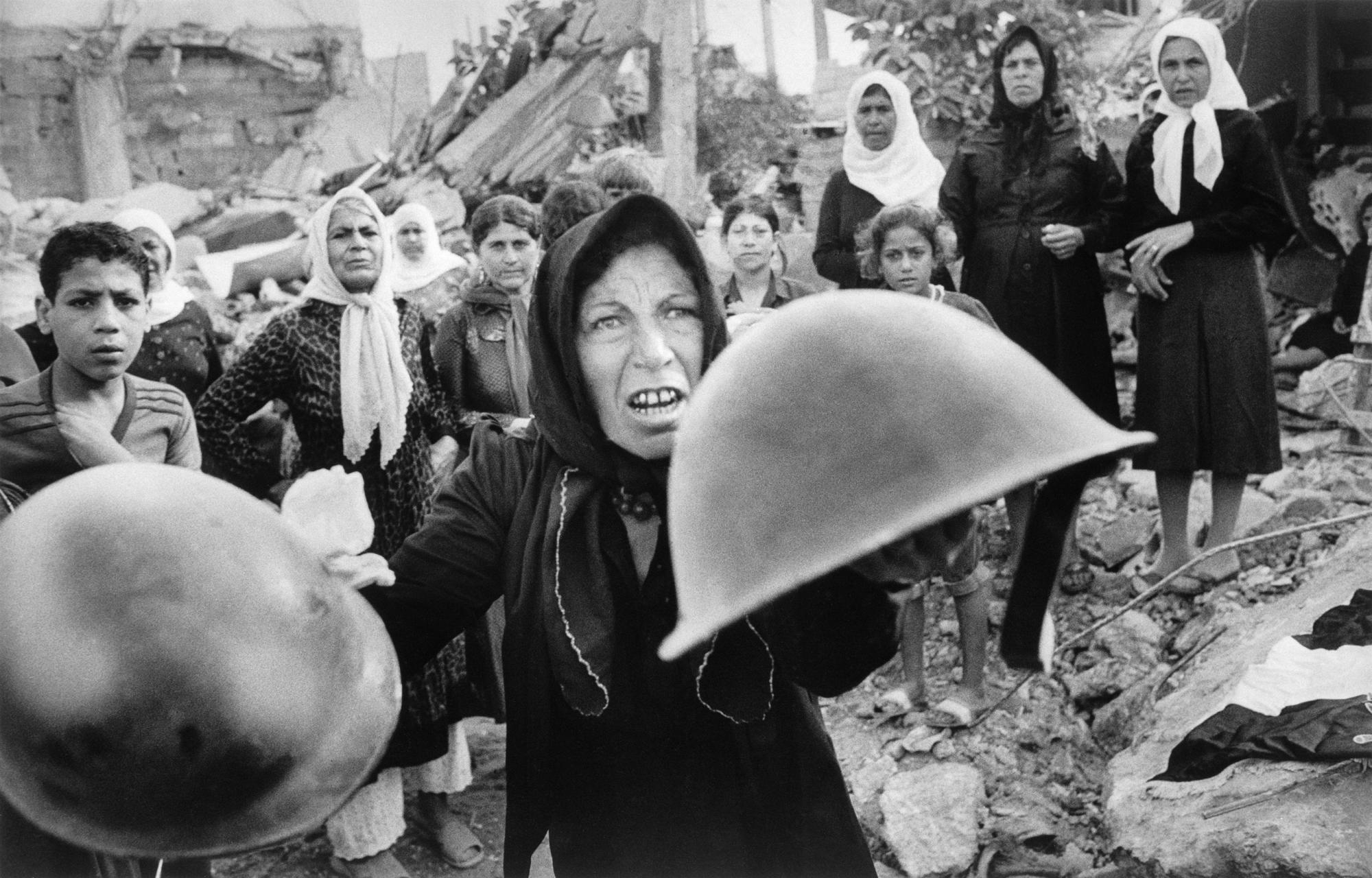 A Palestinian woman brandishes helmets during a memorial service for victims of Lebanon’s Sabra refugee camp massacre in Beirut, Lebanon, Sept. 27, 1982. She said the helmets were worn by those who massacred hundreds of Palestinians. (AP Photo/Bill Foley)
ADVERTISEMENT 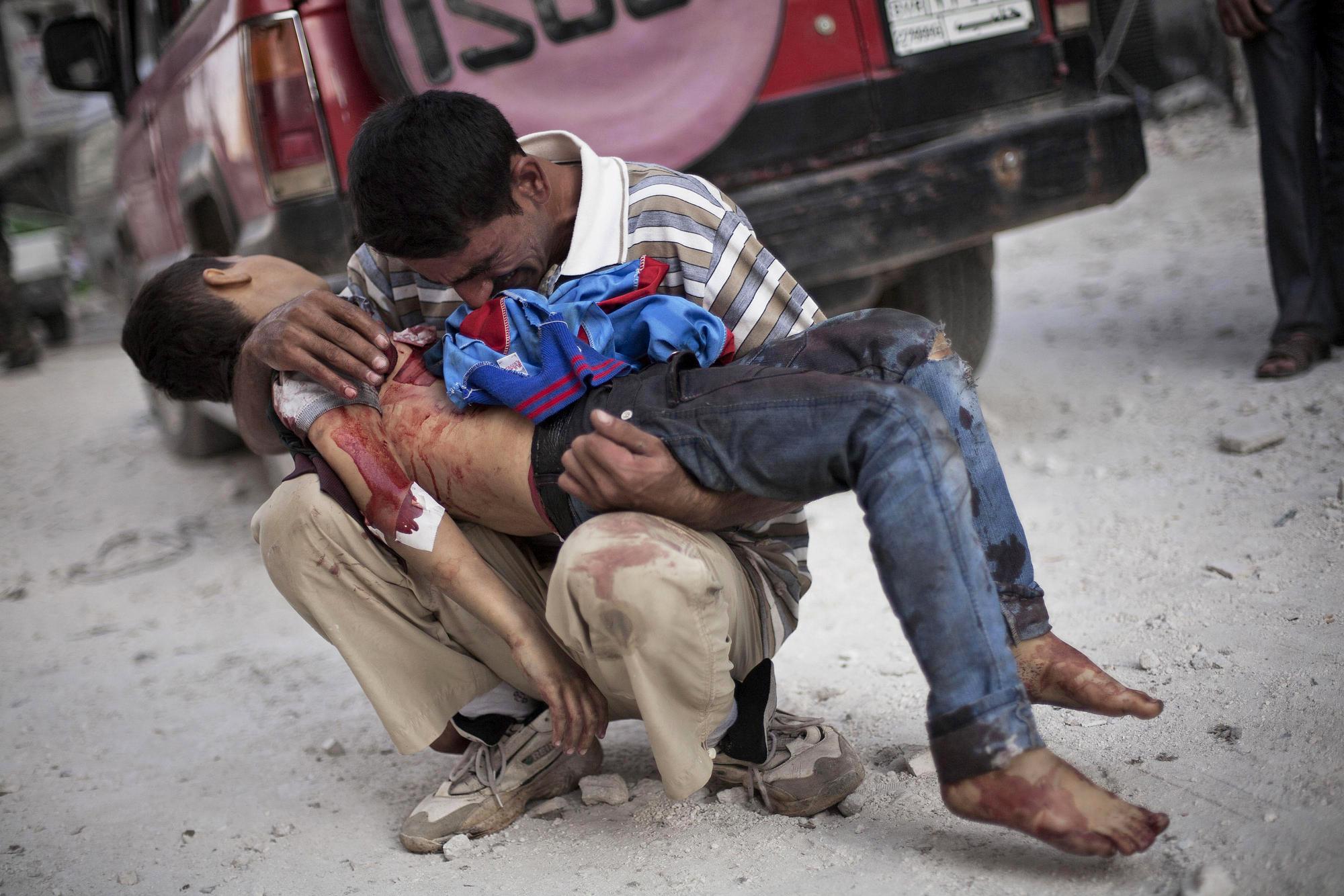 A man cries over the body of his son near Dar El Shifa hospital in Aleppo, Syria, Oct. 3, 2012. Three suicide bombers detonated cars in a government-controlled area of the battleground city, killing at least 34 people, leveling buildings and trapping survivors under the rubble. More than 120 people were injured. (AP Photo/Manu Brabo) 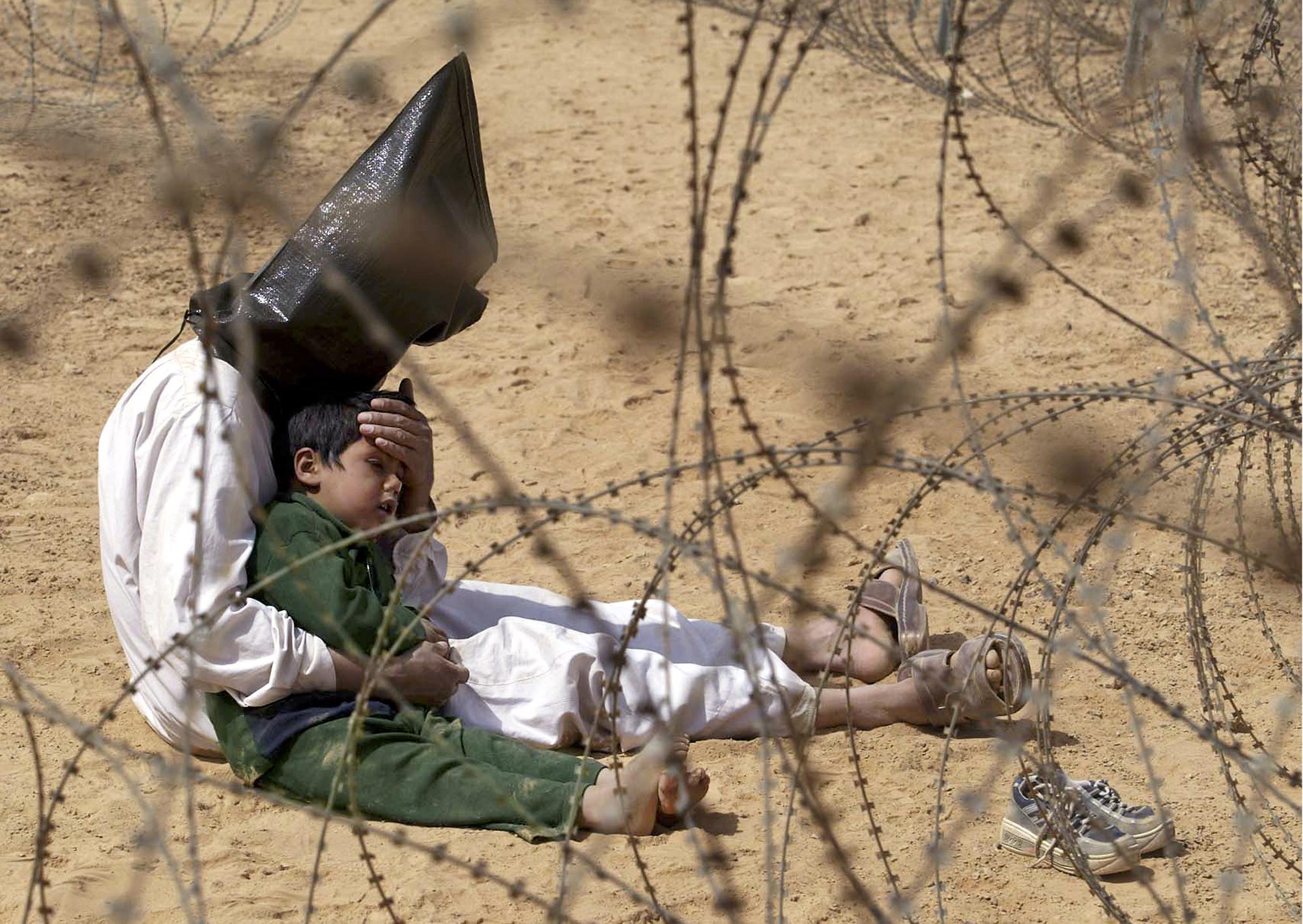 An Iraqi prisoner of war comforts his 4-year-old son at a regroupment center for POWs of the 101st Airborne Division near An Najaf, Afghanistan, March 31, 2003. The man was seized in An Najaf with his son and the U.S. military did not want to separate father and son. (AP Photo/Jean-Marc Bouju) 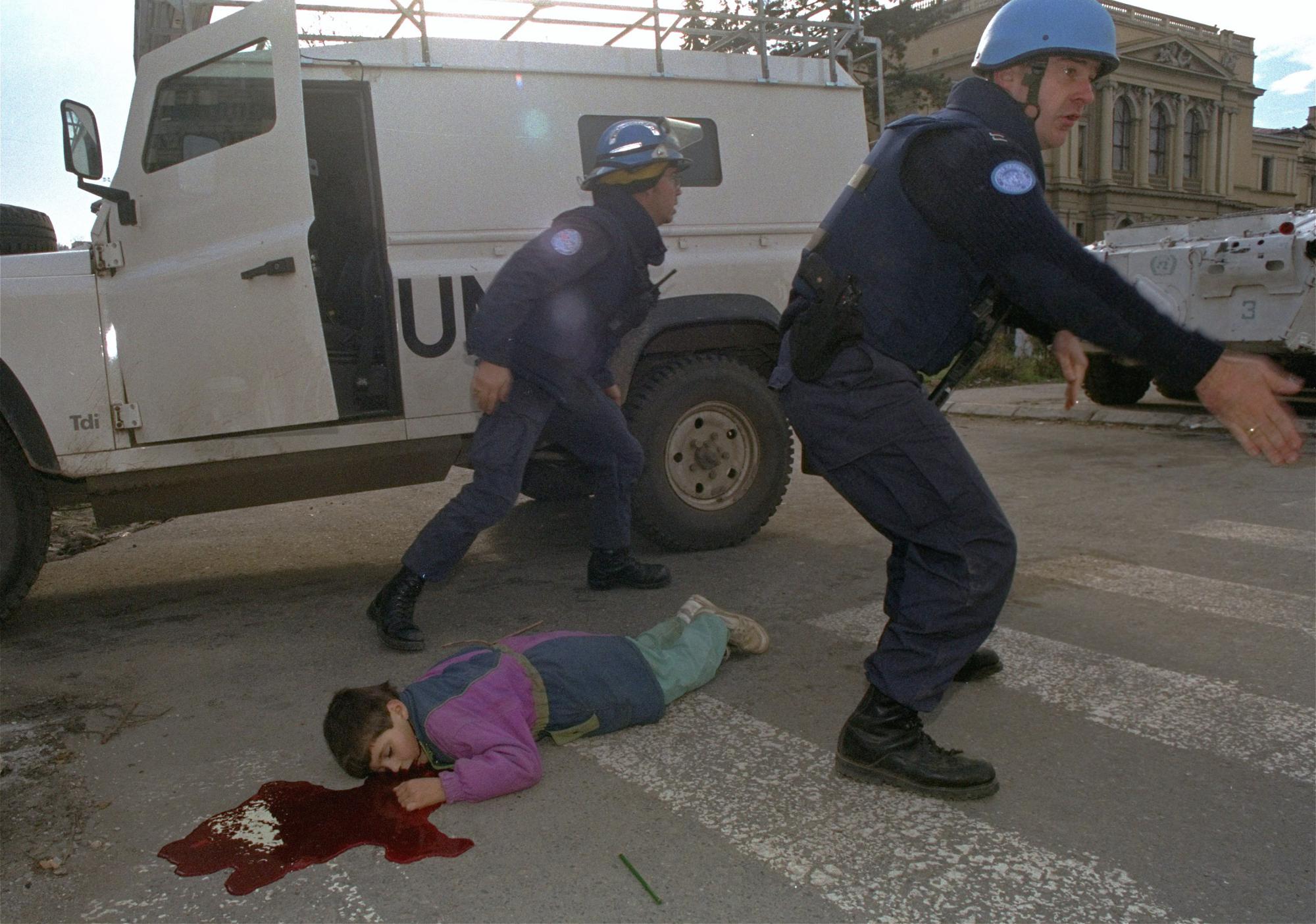 Seven-year-old Nermin Divovic lies mortally wounded in a pool of blood after he was shot in the head as U.S. and British U.N. firefighters arrive to assist in Sarajevo, Nov. 18, 1994. The boy was killed by a sniper firing from an apartment building along the notorious Sniper Alley in the city’s center. The firefighters were at his side almost immediately, but the boy died. (AP Photo/Enric Marti) 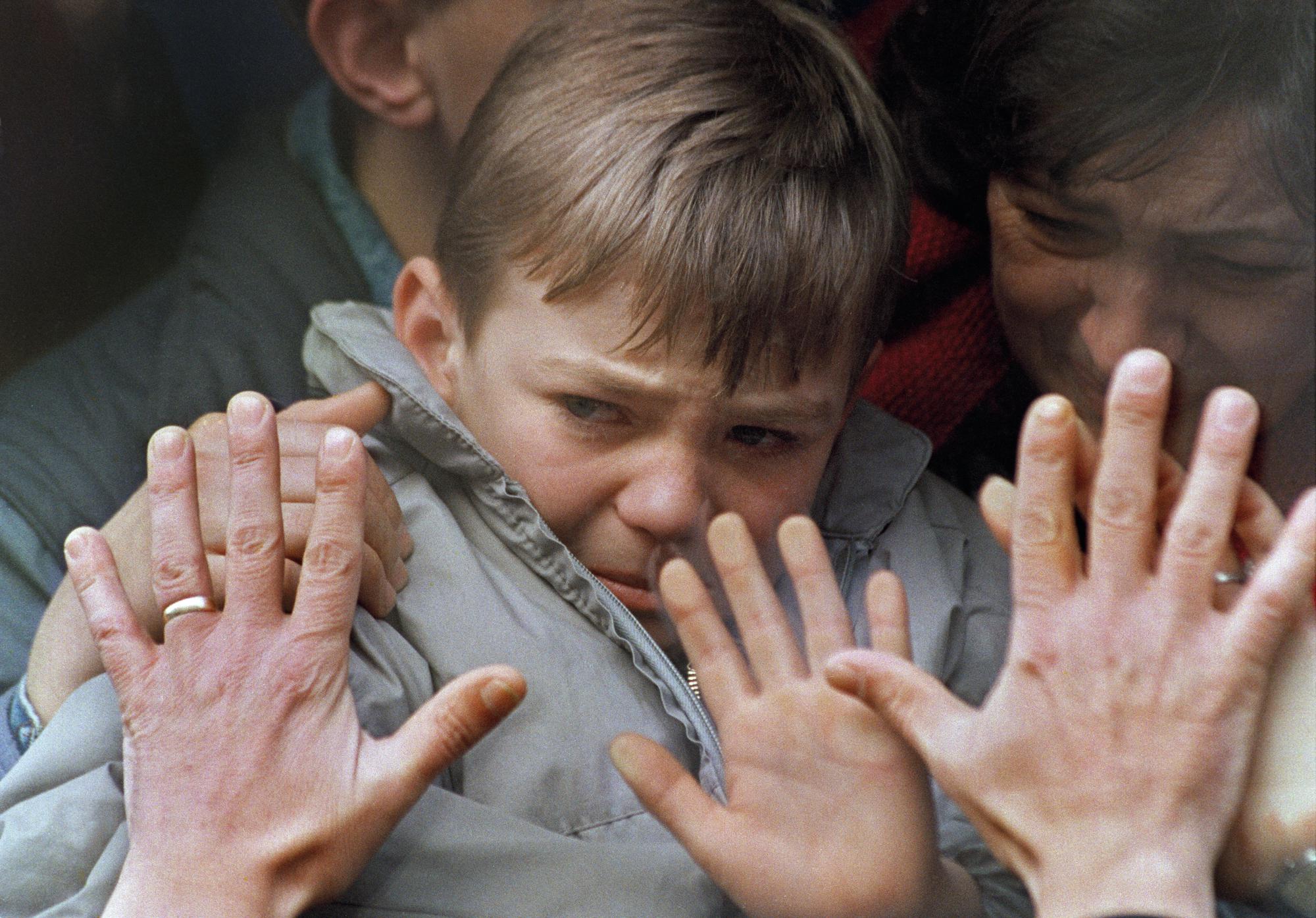 A father’s hands press against the window of a bus carrying his tearful son and wife to safety from the besieged city of Sarajevo, Bosnia during the Bosnian War, Nov. 10, 1992. Women, children and the elderly who had endured months of siege were allowed to leave the city on Red Cross buses, breaking apart many families. (AP Photo/Laurent Rebours) 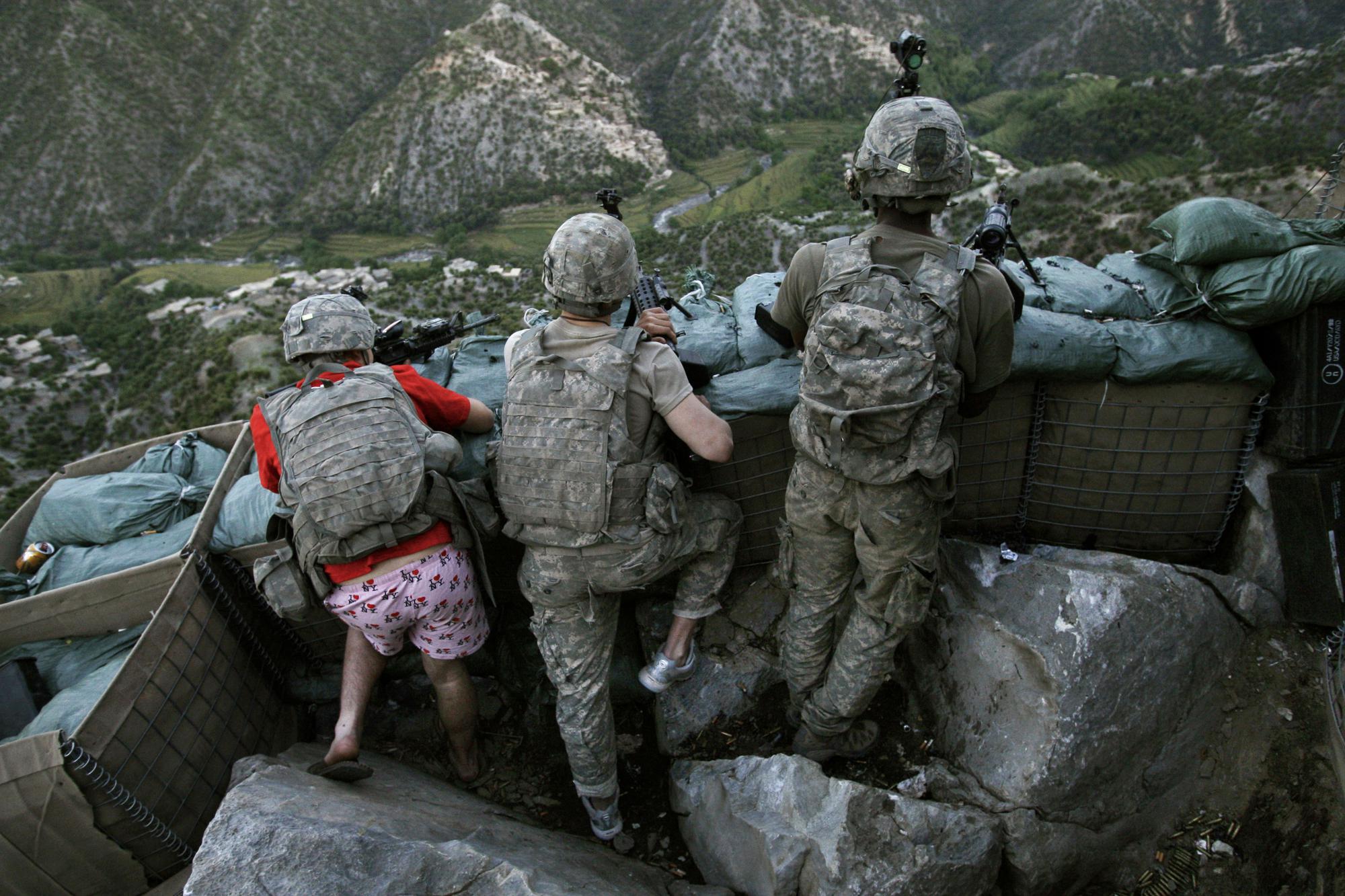 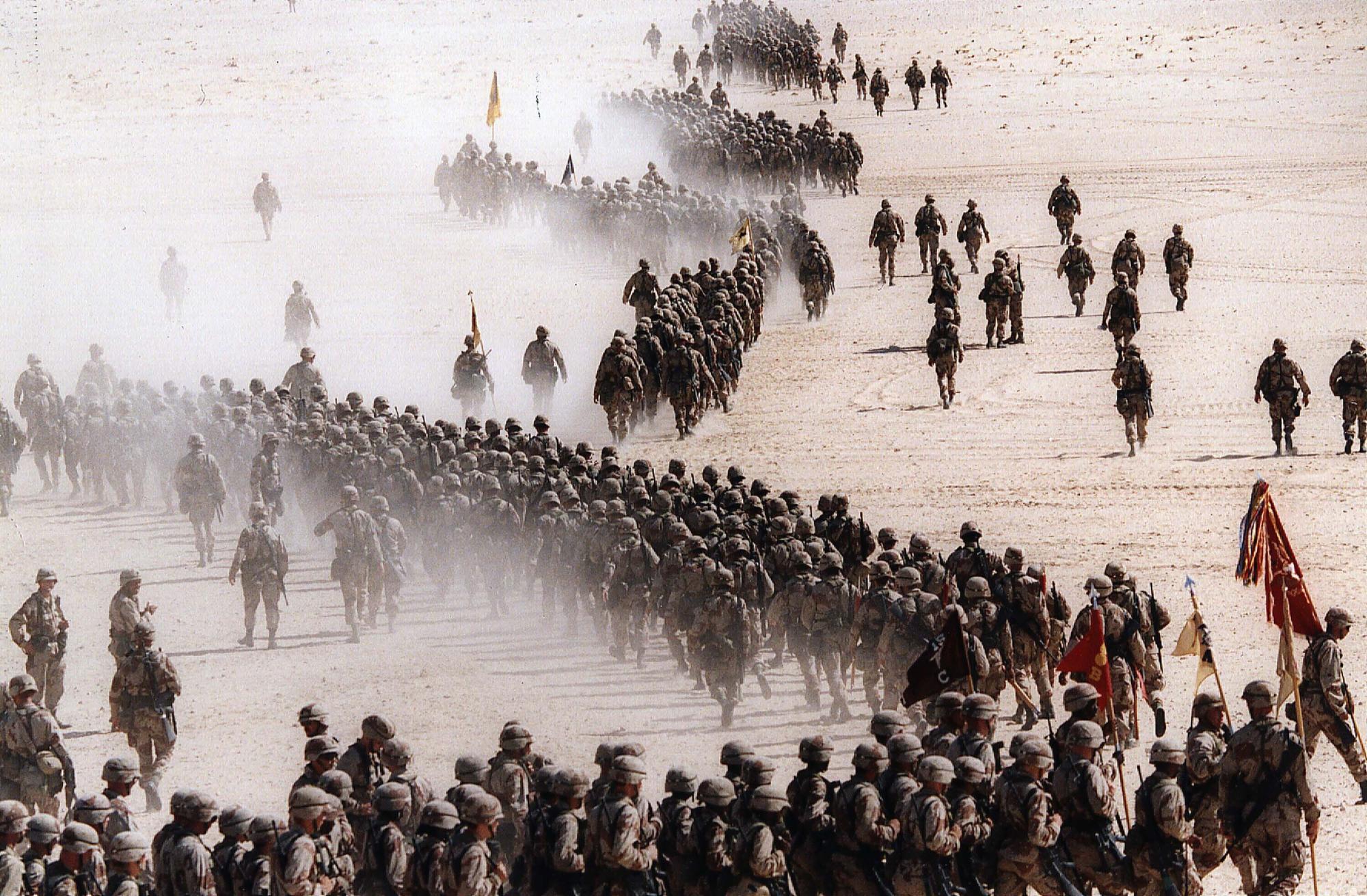 Troops from the U.S. 1st Cavalry Division deploy across the Saudi desert during preparations prior to the Gulf War after Iraq’s invasion of Kuwait, Nov. 4, 1990. (AP Photo/Greg English) 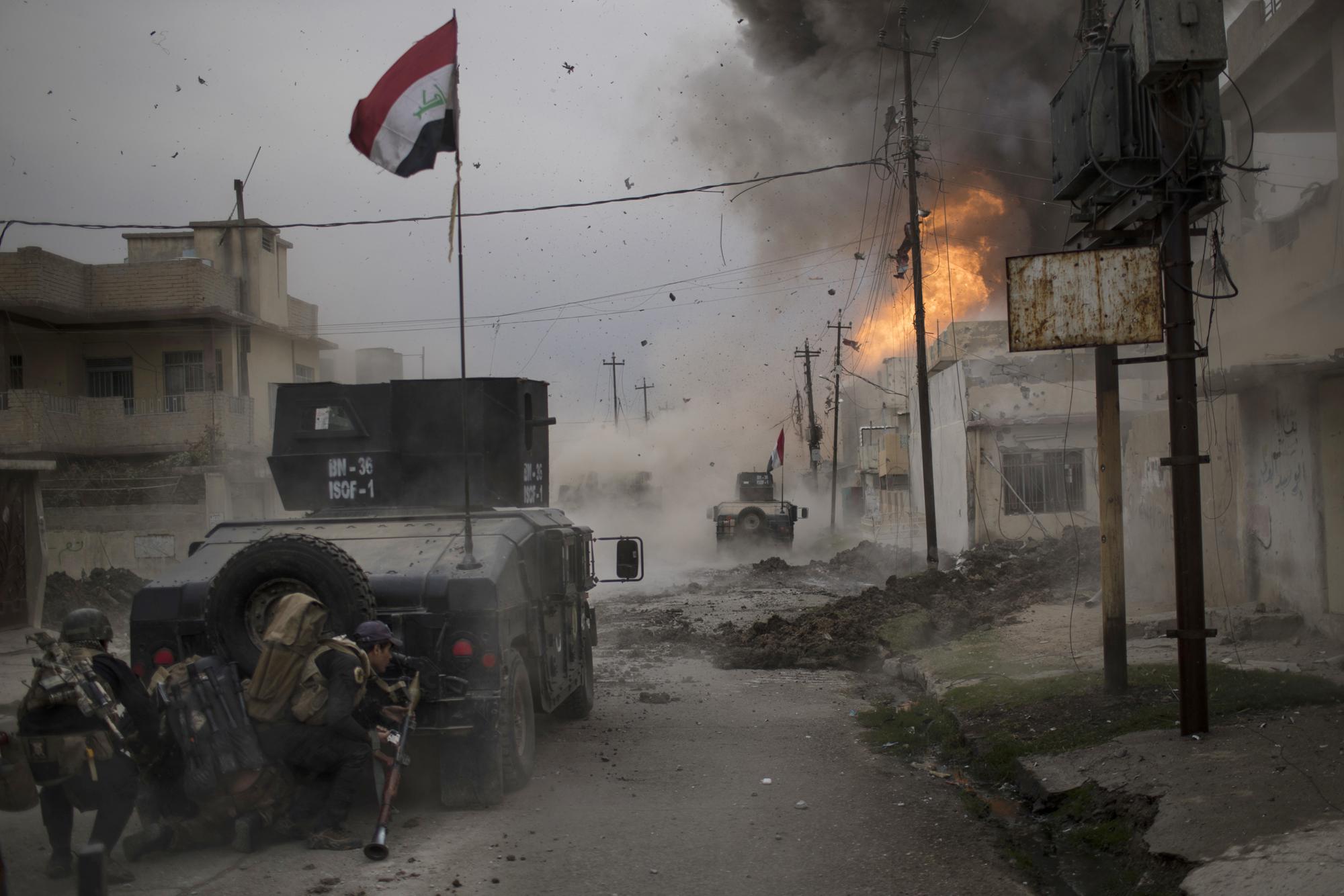 A car bomb explodes next to Iraqi special forces armored vehicles as they advance toward territory held by the Islamic State group in Mosul, Iraq, Nov. 16, 2016. (AP Photo/Felipe Dana) 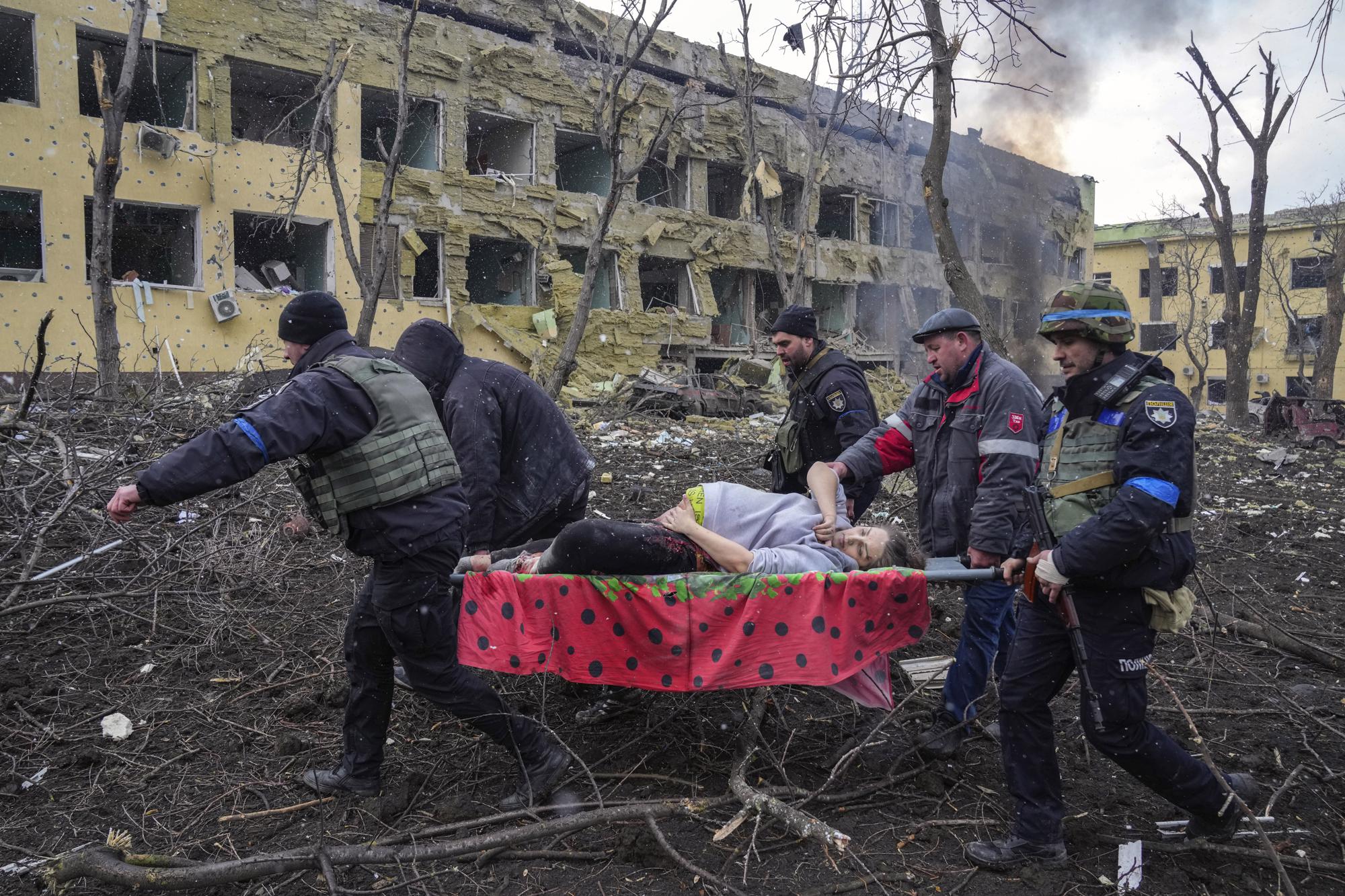 A pregnant woman whose pelvis had been crushed and her hip detached during Russian shelling is evacuated from a maternity in Mariupol, Ukraine, March 9, 2022. The woman was taken to another hospital closer to the front line but did not survive. (AP Photo/Evgeniy Maloletka)
Fonte:morningwire@apnews.com
Bons Negócios
Compartilhar: